Total hip replacement is a highly successful, life changing procedure for thousands of patients every year.  It is safe, reliable and effective at relieving pain, giving back mobility and restoring quality of life.  The technical side of the procedure has undergone massive changes in the last 50 years, with revolutionary new implants and techniques to give long term implant survival and minimal  surgical morbidity.

The “approach” for total hip replacement refers to what access route is used through your tissues to allow the surgeon to place the hip implants.  Options are: 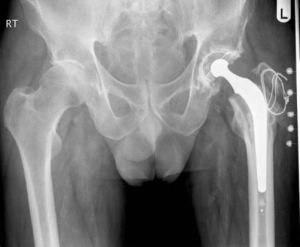 The Posterior Approach was developed later and this largelysolved the problems of tendon and bone healing of the Hardinge and Lateral Approaches.  It involves an incision 15-20cm long which is curved over the buttock.  It involves splitting the Gluteus Maximus muscle and cutting the small muscles which attach to the back of the hip joint.  This is an excellent approach which can easily be extended and is the approach of choice for complex total hip replacement and revision procedures.  Potential problems associated with this approach include:

In a bid to reduce the impact of surgery, ‘mini incision’ total hip replacement was developed which used parts of the more traditional posterior incision and approach, but with reduced muscle and soft tissue damage.  The benefit of using this approach is that it can easily be extended to make a posterior approach should difficulties arise.

The anterior approach to the hip joint was first described in 1881 for draining infected hips, and was first used for joint replacement in France approximately 40yrs ago.  It involves going between the muscles, rather than cutting them.  It is a technically difficult approach that was largely refined by Joel Matta in the USA and Frederic Laude in Paris with the introduction of specialised instrumentation and techniques to make it easier to place large total hip implants through a small incision (8-10cm) at the front of the hip.

Facts vs Hype in Anterior THR: What the studies show!

There has been a lot of marketing and interest in the approach for total hip replacements.  The published studies are less clear on the benefits of one approach over another.

Which approach is right for me?

Many patients have heard of one approach being ‘better’ than another, and may request a particular approach based upon friends’ experiences, or searching the internet.  Quite often, the approach you may have read about will be the most appropriate one for you.  However, this needs very careful consideration, as many factors need to be taken into account when deciding upon surgical anterior or posterior hip replacement approach.  Patient size and weight, underlying bone structure and deformity, medical problems, previous surgery, the type of implant to be used and the type of anaesthetic all have a bearing upon which is the best option for you.

Which approach does Dr Slattery use?

Dr Slattery has extensive experience with both anterior and posterior approaches for total hip replacement.  He has learnt the intricacies of Direct Anterior Total Hip Replacement in both Switzerland and Australia from world leaders in this technique.  He is experienced in hip preservation and pelvic trauma surgery from both anterior and posterior approaches.  His experience is that with the anterior approach and a rapid recovery pathway patients generally recover much quicker than after a posterior hip replacement, but the most important thing is that the components are inserted precisely with the use of X-ray, which is very difficult to achieve with other approaches.

Which method of hip replacement is the best – Anterior or Posterior?

Both anterior and posterior hip replacement techniques offer distinct advantages and disadvantages in certain circumstances, meaning one patient may benefit more from anterior, and another from posterior. Dr Slattery will be happy to discuss the difference between the two with you and help guide you towards the one best suited for your circumstances and goals.

What percentage of hip replacement is anterior?

It is estimated that between 15 and 20% of all hip replacements employ the anterior technique. Dr Slattery has experience performing both anterior and posterior hip replacement techniques, ensuring that regardless of the technique required he will be able to consult.

What are the disadvantages of anterior hip replacement?

Anterior hip replacement can result in numbness and has a higher rate of fracture as compared to posterior hip replacement, but the reduced incision size and damage to muscle can overall contribute to a faster recovery time. The anterior approach is not recommended for those with bone weakness (osteoporosis/osteopaenia), as this increases the fracture risk.

Who is a good candidate for anterior hip replacement?

Most patients are good candidates for anterior hip replacement, with patients of nearly all sizes being capable of undergoing the procedure.

We aim to see all fractures within 24hrs

Dr Slattery is still available for consultation during the COVID-19 pandemic. Please contact our rooms to schedule an appointment either via telehealth or in person depending upon your situation.
Please call or email us to arrange an appointment.
Learn More